By Ryusei the Morning Star,
November 2 in Debates

Imagine the following scenario: ****** dies, tragically, but managed to make it to heaven. God is waiting there at the pearly gates for him, and says he will answer any 1 question for ******, wit 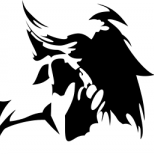