new deck Envoys to the next world deck! Any tips or constructive criticism on how to make them function better is appreciated. All card art is not mine. 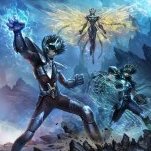